During my eleven years as a travel writer, I contributed to many travel guidebooks, mainly for Rough Guides. I also wrote four books of my own. Here they are… 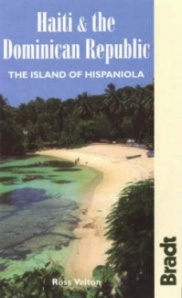 I wrote this book in the late 1990s, at a time when there was very little tourist information on Haiti.

I believe this was the first book to cover both countries of the Caribbean island of Hispaniola.

The Dominican Republic was – and still is – a popular tourist destination, but Haiti definitely was not.

I remember walking the streets of a town in Haiti called Port-de-Paix, drawing a map as I went because there was nothing else available.

This was my fist book and I wrote it with a pioneering spirit, which was energized by the unique spirit of the Haitian people.

And that spirit is why Haiti will always be in my thoughts.

The people are what makes Africa my favourite part of the world.

I chose Mali as the subject of my second book because, like Haiti, it was a relatively unknown destination.

Timbuktu – like so many dreams – turned out to be a disappointment. But Mali’s great river and desert were not.

After the Mali book, I went on to write about other countries in Africa, such as Burkina Faso, Guinea-Bissau, Mozambique and South Africa.

About ten years ago, I lived in a nudist resort. In fact, it was a small nudist town, with a seasonal population of tens of thousands.

Families played on one part of the beach, swingers on another, and the gays occupied the last stretch of sand.

It was an uneasy mix, but it worked.

And this tolerance is what made Cap’d’Agde a magical place for me.

In this book, I wanted to be honest.

It was a book about Micky Mouse with a mid-life crisis, Goofy on the verge of a nervous breakdown and Donald Duck on Prozac.